I have to say Bravo! to the class for their research so far. I was concerned that people would pull things from content farms, but so far almost everything has been serious academic research. There are pros and cons to those articles though. Some of them look highly technical, and may require an expert background to understand fully. That type of literature is sometimes written by PhDs for PhDs, which doesn’t always help out the rest of us. So if you run into one of those, you can either toss it out and find another, or try to work through it. Our friends at Purdue made a flash tutorial that gives a process for reading scientific papers. They suggest a reading order of abstract – discussion – introduction – results, saving the methodology for last or perhaps skipping it altogether. Instead of reading from beginning to end, they say to go from the ends to the middle. The reason is that the methods tend to be lengthy and technical, and possibly inaccessible to non-experts. It’s a good way of getting the gist without getting bogged down.  The tutorial also shows you what the internet looked like back in the 90s, but I won’t make fun of it in public.

The Internet Course summer edition has officially started, and today we brainstormed some research approaches to the four major topics we’ll be designing the course around over the next five weeks. Below is a record of that process, and it’s interesting to see the similarities and differences with the spring semester’s brainstorming session back in January. During tomorrow’s class we’ll discuss the CRAAP Test video, as well as get an overview of researching in UMW’s library. After that they’ll immediately be set loose on the library given they only have two days to find three relevant articles for each of the four topics (twelve in all). The life of an internaut is INTENSE!

Once they’ve done their research, students submit their findings to an online form. The articles/books are then vetted by Paul and I based on the CRAAP test (using the red, yellow, green light method described here). An important note here is that there can’t be any redundancy, if two students find the same article or book the first to submit it gets credit and they other has to go fish. This is possible because the form is public and they can see everyone else’s submissions. At least half of the 12 articles/books they find have to be green, which means the meet all of the elements of the CRAAP test. The other half have to at least be yellow, which means there are a few elements in question. Nothing red counts towards the twelve articles they need to find. And with that the course begins to take shape based on what they discover. Hopefully as much of this process is driven by interest and curiosity as expediency and getting it done.

Oh yeah, and after all this are the article/book summaries…

Topic 1: Where it comes from (origins of the internet) 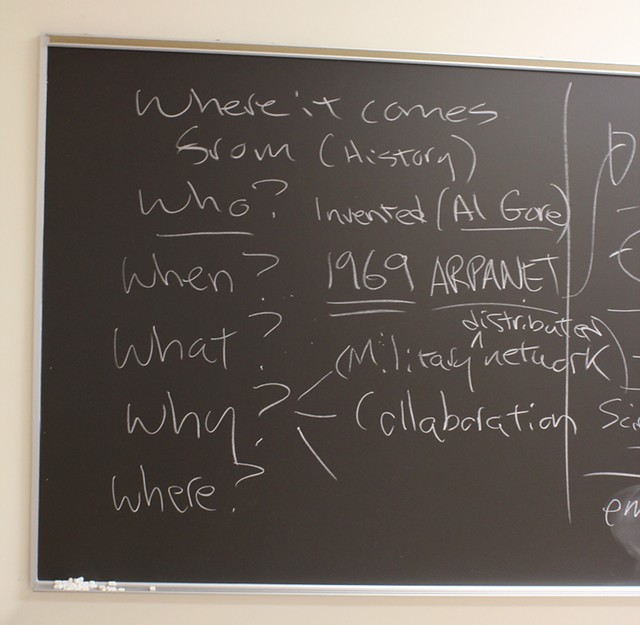 The Internet: Where it comes from

This topic quickly becomes the Who, What, When Where, and Why of the internet. Al Gore can’t be underestimated in this process, and it’s interesting that this was the same approach taken to this topic by the class during the Spring semester. What quickly becomes apparent with this topic is that so many of these details are negotiable. Did the internet start in 1969? Was it earlier, say 1959? or even 1945? Obviously there are hard and fast facts, but the nexus of relationships and events makes the history far richer than the standard narrative.

Topic 2: How it works 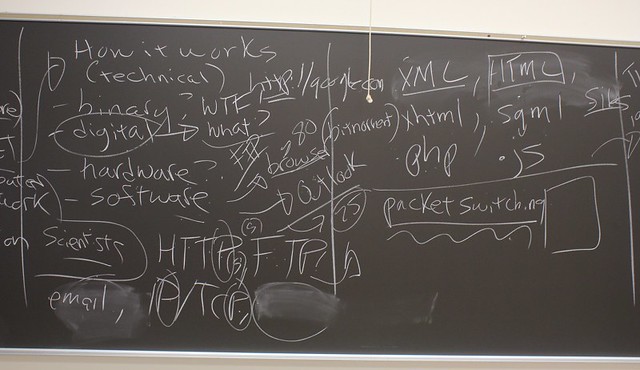 The Internet: How it works

This topic was interesting because the first suggestions that came up was what the hell is binary? Which led to what is digital? I love that it started with these concepts, because in many ways they undergird the internet. From there they suggested hardware, software, protocols, languages, and I threw in packet switching towards the end using bitTorrent as an example to try and explain how this means of networked communication works. A solid list to start thinking about research possibilities to find articles for this topic. 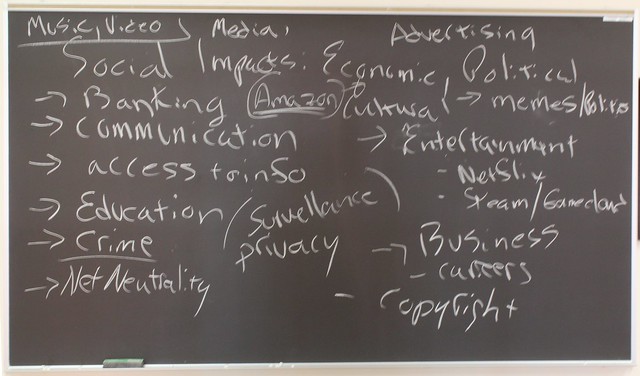 It’s almost ridiculous to suggest we can cover the social impacts of the internet in a week, but faith springs eternal. And just from this cursory list it quickly becomes apparent just how broad and deep the impact is across all domains. I’m hoping as we work up to this topic we can identify a way that pulls from numerous examples to try and communicate these impacts. It will be fun to see how the project for this week attempts to communicate this, should be fun to watch that unfold. 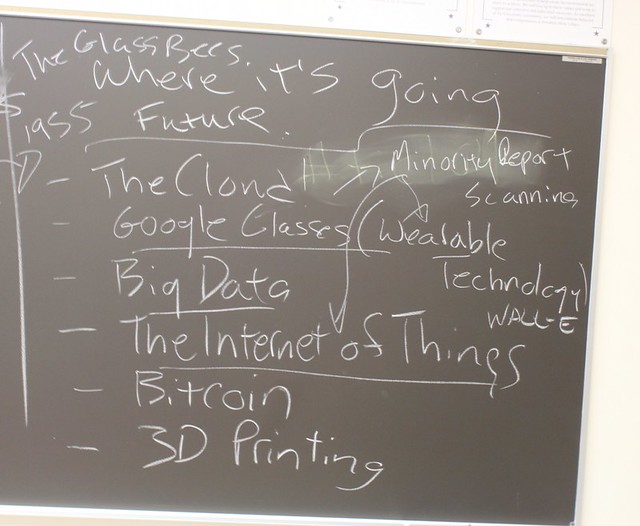 The Internet: Where it’s going

The final topic is the future of the internet, and interestingly enough much of our future framed here is the present. From cloud computing to Google Glass (wearable tech) to Big Data to 3D Printing to the Internet of Things—the future is now. It can be hard to think outside the present, so this topic is an interesting thought experiment, and hopefully we’ll push hard on whether the internet will even be recognizable as such in the not so near future.

source I thought I would share this article from Thought Catalog with you this morning– With this project I’m really trying to capture to social implications of online dating as well. With that comes public opinions, thoughts and issues with online dating. Although this article was, I’m sure, written partially for entertainment purposes, it brings up […]
source When looking at online dating in its entirety, its only right to include the new up and coming phone app called Tinder. Tinder – #ItStartsHere from Tinder on Vimeo. When: Launched September 15, 2012 How it works: You download the app and create a profile connected through your Facebook account. Once registered, you can choose up […]
source Speaking of pros for online dating… ONE “Dating online is just like shopping online: its crazy efficient.” -Micah Abrams I want to focus this post primarily on arguments that support online dating. Micah Abrams, a true advocate, wrote a post entitled “Online dating works great, you’re just doing it wrong” in response to CNN […]
source Its necessary in a project such as this to discuss both the pros and cons of online dating. In this post, I want to focus primarily on the pros. In my own brainstorming and general research, I found that a lot of the following points could be argued for either side. Here are a […]
If you’re just now joining in, my group is researching online dating and how it has emerged, changed and been accepted. In this post, I’m going to look specifically at Match.com, a popular online dating service that was launched in the April of 1995. Just from the about section of the website, Match.com describes itself […]
source “The odd thing about this form of communication is that you’re more likely to talk about nothing than something. But I just want to say that all this nothing has meant more to me than so many somethings.” -You’ve Got Mail (1998) For my presentation/website project, my group has decided to look primarily at […]